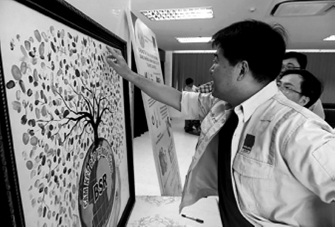 The slogan of the Dung Quất Oil Refinery is "four no," which stands for no smoke, no dust, no noise and no workers. Three of these relate to the environment. The last one is connected with technology. The Factory currently has 1,500 workers; however, there are no passersby inside the Factory.

The Dung Quất Oil Refinery is considered a symbol of a highly automated enterprise. During working hours, every employee is busy at work. Despite being such a huge Factory, it is a peaceful place. The only place where once can see passersby is in the offices.

According to General Director of the Bình Sơn Refining and Petrochemical Co., Ltd (BSR) Trần Ngọc Nguyên, indicators of environmental discharge from this Factory are much lower than specified regulations. Currently, the Factory is applying Việt Nam's Environmental Standards (ISO 2009) in accordance with the current regulations of Việt Nam.

When asked about the "three no" related to the environment, Mr. Trần Ngọc Nguyên explains: "You can imagine, with such huge workshops, if we do not solve the problem of noise, all the workers will go deaf. Moreover, they will not be able to deal with the noise the whole day. The noise will also greatly disturb locals who live close to the Factory".

During the process of design and installation, the Factory was equipped with advanced technologies from industrialized countries, such as EEMUA 140 Noise procedure specification, EEMUA 141, API RP 521 and CONCAWE 87/59. Those people working in an environment with noise exceeding 85 dB (A) are required to use anti-noise cotton and earphones.

To handle emission, BSR has installed proper technical equipment and an exhaustive gas treatment system. This system will collect all toxic gas and gas emissions to meet environmental standards and ensure air around the factory is clean. In particular, the chimney of the factory is built at a suitable height and installed with electrostatic precipitators to handle waste gas that contains high dust content. The Factory is also equipped with a sulfur recovery unit and analysis equipment for continuously analyzing the indicators of polluted emission from the chimney, such as NOx and SOx, thus helping operators monitor and make timely adjustments so that gas emissions do not exceed permitted standards. All waste discharged from the production process is handled carefully and strictly complies with the Law. The hazardous waste discharged from the production process is collected and stored. The Factory has two warehouses for storing hazardous waste temporarily, covering an area of 600 m² per each, as well as a 500 m² per each warehouse for storing industrial waste, which is where it is classified before being transferred to the contractor. In 2015, the Factory collected and handled over 414 tonnes of hazardous waste and 8,225 m³ of non-hazardous waste. 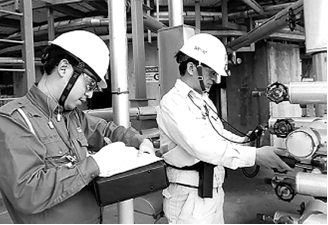 Engineers check waste at the Factory

Apart from purchasing advanced technology to deal with environment pollution at the Dung Quất Oil Refinery, the entire staff of the Factory has played an important role in preserving the environment. If the advanced equipment was handed over to those who are irresponsible and have a lack of awareness, the environment would remain polluted. In addition to managerial works, to better handle environmental pollution, the Factory’s staff never stops learning and brings into full play their innovations and technical improvements, thus also helping save money for the State budget and minimizing pollution threats. Notable are the initiatives made at the electronic workshop, which has demonstrated great responsibility in environmental protection.

This workshop is installed with four steam boilers. During normal operation, three boilers are in operation and the fourth is ready to replace any in case of an incident. Two boilers are installed with Forced-Draft Fan (FD Fan) operated by steam turbine. Nearly 15 tonnes of HP/01 FDF steam is used and 15 tonnes of low-pressure steam is generated. Two FDF-installed boilers and one motor-driven fan boiler are in operation for three month annually.

Master Nguyễn Ngọc Thanh and his colleagues have successfully studied and applied the Project, saving 22 billion VND for the Factory per year.

At the lowest level, every year for three months of operation, two boilers operated by steam turbine and one boiler operated with electric motor, have helped limit 21,384 tonnes of steam discharged into the environment. The low-pressure steam costs 50.03 USD/tonne, saving some 1 million USD/year (excluding the electricity bill). This Project has been applied since January 7th, 2014. 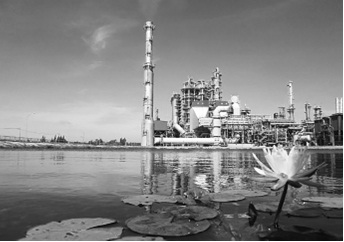 A lake inside the Dung Quất Oil Refinery

Looking back at what the BSR has done in recent years, we can see the tireless efforts on the part of the factory’s employees to protect the environment. We cannot buy a clean environment with money. Despite high costs, decreased profit, long-term capital recovery and several other disadvantages, a clean environment is priceless.

Early June 2016, BSR did its utmost to carry out environmental protection activities on the occasion of the annual World Environment Day (June 5), with the slogan "nature’s call and our actions". We can see how BSR’s leaders and its staff are joining hands ensuring a clean environment.