Implementing effective waste management both economically and environmentally is becoming a major challenge at the global level. This is a challenge not only for developing countries, but also for developed countries. Currently, unsustainable consumption habits, arising from the viewpoint of enjoying socio-economic achievements, are becoming a problem that requires policy changes at all levels, including national policies, the direction and commitment of each enterprise and every consumer.

International experience shows that the benefits of applying economic tools in waste management include: Waste reduction; Reduction in the proportion of hazardous components in generated waste; Increase in the ability to apply safe transportation and treatment of hazardous components; Encouragement of reuse, recycling and recovery of waste; Improvement in the cost-benefit of waste management activities from collection, transportation, treatment to disposal.

In terms of culture, society, natural conditions and economic development, Korea has many similarities with Vietnam and was also an emerging economy only after the 1980s with fast economic growth. Therefore, the study and learning of Korean experience in various management fields for appropriate application will contribute to accelerating the growth as well as the industrialization process of Việt Nam towards environmental and economic sustainability.

The application of domestic waste fee system in Korea

Since 1995, the volume-based waste fee system as the measure to apply economic tools to encourage the waste generation reduction and the implementation of mandatory waste separation at source has been officially applied in Korea. Like Vietnam today, before 1995, in the field of domestic waste management, Korea applied a standard fee collection system on a per capita and monthly basis, without considering the domestic waste generation amount of each household. In fact, this fee collection system did not encourage people to minimize waste generation, as well as voluntarily implement waste separation.  On the other hand, in terms of social justice, this fee system clearly showed the inequality due to the fact that better-off households generated more waste than middle-class or poor households, however, they only had to pay the same fee as the poor households. 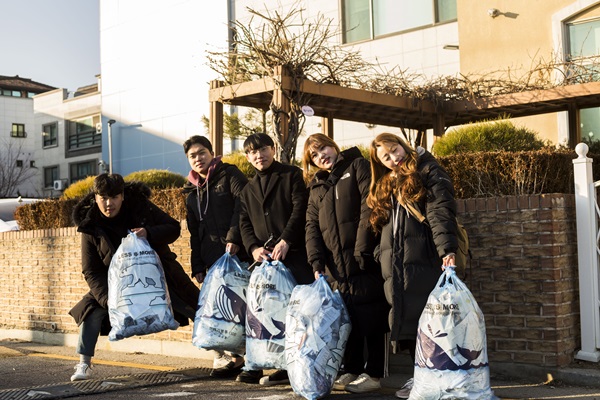 In the Korean VBWFS system, domestic waste is separated into the following categories: recyclable inorganic domestic waste (paper, metal cans, bottles, metal, plastic, cloth ...), organic domestic waste and non-recyclable domestic waste. Waste bags are designed with different sizes, materials and colors according to each type (Table 2).  The selling price of each type of bag is set by the local government, depending on the reality of each region, the lowest price is about 1.450 VND (equivalent to 6% of the price of 1L of gasoline) for the smallest bag (5L) and the highest price is about 13.600 VND for the largest bag (50 L) for household use.  The revenue from bag sales is currently approximately 30% of the total costs of transportation, treatment and disposal of domestic waste in Korea. The cost expenditure of designated manufacturers and sales units of specified domestic waste bags accounts for about 6% of the revenue from bag sales.

According to regulations, the government or legal collection organizations only collect waste that have been properly separated and put in proper bags. For recyclable inorganic waste, people or organizations can put it in ordinary domestic waste bags (meaning they have to pay for the bags) or dispose of in designated areas for the collection facilities to recycle (meaning free waste disposal as there is no payment for the bags). In addition, for some types of waste that are too large in size (such as televisions, refrigerators, tables, chairs, etc.) or construction waste, the waste generators will have to pay another fee for disposal and treatment. With this regulation, people are encouraged to self-separate recyclable waste before disposing to save the cost of buying waste bags. This applies to non-recyclable waste.

Residents or facilities that generate domestic waste can buy waste bags as prescribed at grocery stores or supermarkets. The production and supply of these bags to the retail system is carried out by the provincial authorities on the basis of designating an enterprise or organization permitted to produce and distribute waste bags according to the provisions of law. The act of dumping waste not at the prescribed places or putting waste in improper bags when discharging will be severely punished.

In addition to its achievements, the implementation of the VBWFS system in Korea still needs to be improved to address a number of challenges, such as illegal dumping and incineration and avoidance of purchase of domestic waste bags as prescribed. To overcome the improper waste dumping situation, local governments have adopted surveillance measures such as increasing the installation of CCTV systems (surveillance cameras for security and civil behavior) in residential areas, as well as issuing many reward policies for people who detect acts of improper waste dumping (50% of the fines collected from dumping individuals will reward those who detect acts of waste dumping).

Figure 1. Changes in the application of domestic waste treatment technology in Korea (1995 - 2015)

Suggesting some proposals for Việt Nam to study, review and apply

With the recent great economic achievements, after more than 30 years of applying the policy of renovation and open economy, Việt Nam has officially been ranked among the middle-income countries since 2010. However, these great economic achievements have also brought Việt Nam new challenges in environmental protection. Along with the level of economic growth and people’s living standards, the situation of unsustainable consumption and the domestic waste generation amount per capita in Việt Nam has also increased rapidly (from 0,9 - 1,2 kg/person/day in 2004 to 1,45kg/person/day in 2008 in big cities). In fact, in recent years, Việt Nam has been facing a series of difficulties and challenges in domestic waste management such as: The volume of generated domestic waste has increased rapidly with increasingly diverse components; The infrastructure system for domestic waste collection, transportation, treatment and disposal is outdated and does not keep up with the domestic waste generation situation in reality; The cost of domestic waste management is increasing and becoming a burden for the national budget... These are the factors that put strong pressure on the expansion of domestic waste landfills, which is the key technology that Việt Nam is currently applying to treat domestic waste.

Therefore, Việt Nam needs to take prompt policy measures to early address these challenges and improve the effectiveness of domestic waste management. Currently, in environmental protection activities in general and waste management in particular, Việt Nam has many similarities with Korea before the application of the VBWFS system in 1995. Based on the current situation analysis in Việt Nam and comparison with Korea in the period before the implementation of VBWFS, some advantages and opportunities for the application of VBWFS can be clearly seen as follows:

Fourth, Vietnamese people have a high sense of savings in paying for environmental services. In fact, currently in many big cities, people still separate and sell recyclable domestic waste to the unofficial waste collection teams that Vietnamese people still call "scrap metal trading facilities". This will be a very positive factor showing the people's ability to respond if applying the VBWFS in Việt Nam.

Fifth, the key point of the VBWFS policy is to provide equity in the payment of environmental services, the waste generators shall pay money as per the generation amounts, through the stipulated price of bags based on the generated waste amount. If the Vietnamese people clearly understand this principle, they will surely actively participate and support the implementation of this policy.