Wild tigers claw their way back from extinction

New study shows a 58 percent increase in tiger populations in one country. 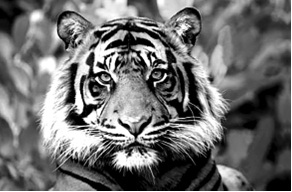 Can India's wild tiger population claw its way back from extinction? According to the latest research that answer is yes.

The tiger (Panthera tigris) is one of the largest cat species in the world. Males can weigh up 850 pounds in the wild. Massive as they are, these majestic creatures require large contiguous areas of habitat where they can hunt their prey typically ungulates such as deer and water buffalo.

Because they are indigenous to some of the most densely populated places on Earth, this large space requirement has resulted in a number of environmental conflicts with humans. This, combined with the heavy demand for tiger skins and body parts in some areas of the world has led to decimated tiger populations worldwide.

At one time, tigers were abundant, ranging from Turkey in the East to the Eastern coast of Russia to the West. Their numbers were estimated at 100,000 at the turn of the 20th Century. Over the course of the last one hundred years, tigers became extinct in western Asia and their populations became fragmented in the remaining parts of their range.

Today, wild tigers are threatened throughout the world. They are listed as "endangered" on the IUCN's Red List of Threatened Species, with numbers ranging from 3,000 - 4,000 animals. But the latest population data out of India are promising, and the rest of the world is taking a closer look to see if this iconic animal can in fact make a comeback.

The National Tiger Conservation Authority (NTCA) recently surveyed the population of tigers in India using 9,735 cameras that monitored 146,000 square-miles of forests. Researchers gathered photos of 80 percent of India's tigers, identifiying them by their stripe patterns - an indicator as unique to each individual tiger as fingerprints are to humans.

The results were promising. The tiger population in India grew from 1,706 in 2011 to 2,226 in 2014. That works out to a 30 percent increase. When you compare the latest numbers to population data from 2006 when there were 1,411 tigers in India, it equals a 58 percent increase in population!

What's more, with more than 70 percent of the world's tigers living in India, this impressive population rebound signals good news for the tiger population as a whole world-wide.

"Our latest estimate today is that India has 70% of the world's tiger population and we have now 2,226 tigers presently in 47 tiger reserves (up from 1,706 in 2011) and this is a great achievement. It is a net increase of 30% over the last estimation", Environment Minister Prakash Javadekar said in a recent statement.

While India's numbers are worth celebrating, conservations caution that the battle is not yet won. Within other tiger range countries - China, Laos, Cambodia, Việt Nam, Thailand - there is still huge demand for tiger skins and bones, making poaching and illegal tiger trade a constant battle.

Debbie Banks, a lead tiger conservationist working for the Environmental Investigation Agency - a U.K based conservation group said: "Tigers are major indicator of the health of the environment, certainly the health of the forest that they inhabit. But they are the water gods, if you like. They are indicators of how well we are doing to conserve forests that provide water for millions of people and mitigate climate change".