Some changes in green technology policies in Korea since 2008

Green technoly has been paid special attention to by the Government of Korea since 2008 when President Lee Myung-bak approved the National Vision on Green Growth, Low Carbon.

According to the Green Technology Committee of Korea, Green Growth (GG) will lead to environmental protection and creation of new industries as well as new jobs thanks to green technologies and clean energy (such as solar energy, tidal/wave/ocean energy, and hydropower) as a replacement for fossil fuels (such as oil and coal)". In the umbrella Law on GG, Low Carbon of Korea, GG is defined as: "GG is the growth that achieves economic and environmental harmony, through saving and efficient use of energy and natural resources in order to mitigate climate change and environmental degradation; simultaneously promotes research on clean energy and green technology (GT) to ensure new growth motivation and create new jobs...". Through which, Korea has reiterated that GT is the focus of the national vision on GG and GT development towards creating new growth motivation. 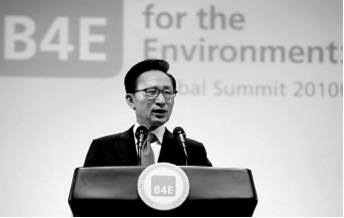 In 2009, Korea has established comprehensive policies on GT research development. Since then, the role of GT in the economic development of Korea has always been highlighted; at the same time, GT policies have been improved.

Accordingly, since 2008, policies on GT have changed, amended and strengthened, and improved on previous period’s shortcomings. In terms of the growth model, Korea has converted from the GG, Low Carbon model (during President Lee Myung-bak term) to the "New era of hope and happiness" vision with the innovative economy model (during President Park Geun-hye term); however, the core values and development orientations towards a green, environmentally - friendly economy model, emphasis on the role of GT, clean energy and maintenance of targets of emission reduction of the Korean Government are unchanged. A recent proof is that the Government of Madam Park has declared the target for greenhouse gas reduction in 2030 to be 37% compared to the BaU scenarios (following the target of 30% reduction in 2020 announced during the President Lee Myung-bak period). This declaration clearly illustrates enormous efforts of the new Government on following green targets that Korea has declared to the world. Therefore, this declaration has achieved positive response from the people and the international communities, at the same time, many researches suggest that the time under Madam Park’s ruling will open a new era on GG (GG Era 2.0).

The foundation for maintaining these development orientations, including orientation on GT, is the operation of the GG Committee, which was previously under the President’s command, and is currently under the Korea’s Prime Minister’s. Professor Lee Seung-hoon - Chairman of the Committee informed that: The Committee will strongly follow the GG Strategy of the previous Government; of which, subsequent policies will focus mostly on innovation, commercialization, production and export of green technologies, as well as relevant products and processes.

In other words, in the past few years, there are changes on GT policies and these changes are necessary and appropriate with the development process. The President Lee Myung-bak period could be considered as the fundamental period - establishment of legal foundations (Law on GG, Low carbon), establishment of the domestic operating agency (GG Committee), establishment of the international operation organization (Global GG Institute), development of five-year Plan and 60 years vision… which lays the foundation for the GT development process. During the President Park Geun-hye term, based on existing foundations, the GT development converts from research to pilot application and expansion to commercialization, production and exports. For example, the pilot smart electricity grid system that was developed in 2009 in Jeju applies advances of the information technology into the existing electricity grid. With conducted researches, in the near future, Korea will convert to trials at commercial level. The first trial will be conducted in a big city then expanded to nationwide. Therefore, GT will develop towards "from lab to daily practice".

Changes in GT policies of Korea:

Currently, the GT development is a global trend and a highly promising potential market in the future. In terms of global and domestic context, Korea has proactively participated in the GT race with the hope to find new motivations for economic development in the upcoming period. This effort of Korea does not only contribute to stimulate the national economy but also show the responsibility of a responsible nation to the global threats.

In terms of policies, within less than 10 years, the Korean Government has created relatively adequate policies and legal foundations for future development orientations. For each development period, Korea established short-term to medium-term and long-term plans, with specific objectives to measure and assess the outcomes as well as to propose adjustments if needed. The development of a methodical policy method will definitely create conditions for green technologies of Korea to develop further in the future.