Air pollution causes a “huge” reduction in intelligence, according to new research, indicating that the damage to society of toxic air is far deeper than the well-known impacts on physical health. The research was conducted in China but is relevant across the world, with 95% of the global population breathing unsafe air. It found that high pollution levels led to significant drops in test scores in language and arithmetic, with the average impact equivalent to having lost a year of the person’s education.
“Polluted air can cause everyone to reduce their level of education by one year, which is huge”, said Mr. Xi Chen at Yale School of Public Health in the US, a member of the research team. But the effect is worse for the elderly, especially those over 64 and for men, for those with low education. If we calculate [the loss] for those, it may be a few years of education”, he said.
Previous research has found that air pollution harms cognitive performance in students, but this is the first to examine people of all ages and the difference between men and women. “The damage in intelligence was worst for those over 64 years old, with serious consequences. We usually make the most critical financial decisions in old age. This report’s findings are extremely worrying”, said Mr. Xi Chen. 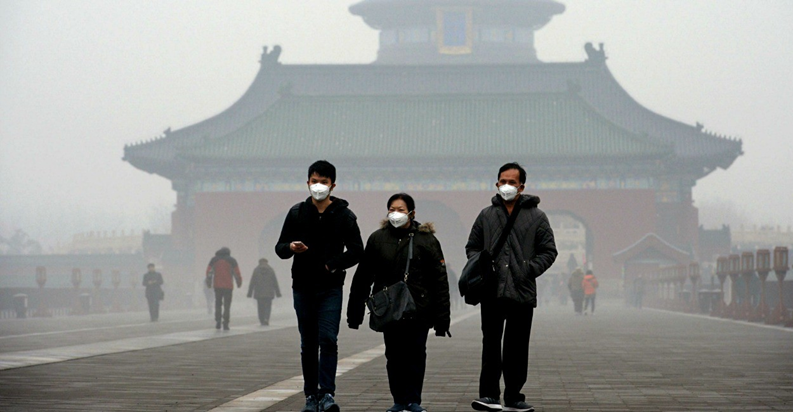 Air pollution in China is three times above WHO limits
Air pollution causes seven million premature deaths a year but the harm to people’s mental abilities is less well known. A recent study found toxic air was linked to disorders and earlier work linked it to increased mental illness in children, while another analysis found those living near busy roads had an increased risk of dementia.
The new work, published in the journal Proceedings of the National Academy of Sciences, analyzed language and arithmetic tests conducted as part of the China Family Panel Studies on 20.000 people across the nation between 2010 and 2014. The scientists compared the test results with records of nitrogen dioxide and sulfur dioxide pollution. They found the longer people were exposed to dirty air, the bigger the damage to intelligence, with language ability more harmed than mathematical ability and men more harmed than women. The researchers said this may result from differences in how male and female brains work.
Mr. Derrick Ho at the Hong Kong Polytechnic University said, the impact of air pollution on cognition was important and his group had similar preliminary findings in their work. “It is because high air pollution can potentially be associated with oxidative stress, neuroinflammation, and neurodegeneration of humans”, he said.
Mr. Xi Chen said air pollution was most likely to be the cause of the loss of intelligence, rather than simply being a correlation. The study followed the same individuals as air pollution varied from one year to the next, meaning that many other possible causal factors such as genetic differences are automatically accounted for. The scientists also accounted for the gradual decline in cognition seen as people age and ruled out people being more impatient or uncooperative during tests when pollution was high.
Air pollution was seen to have a short-term impact on intelligence as well and Mr. Xi Chen said this could have important consequences, for example for students who have to take crucial entrance exams on polluted days. But there is no shortcut to solve this issue. Governments really need to take concrete measures to reduce air pollution. That may benefit human capital, which is one of the most important driving forces of economic growth. In China, air pollution is declining but remains three times above World Health Organization (WHO) limits.
According to the WHO, 20 of the world’s most polluted cities are in developing countries. China, home to several of those cities, has been engaged in a “war against pollution” for the past five years. The results would apply around the world, Mr. Xi Chen added. The damage to intelligence was likely to be incremental, he said, with a 1mg rise in pollution over three years equivalent to losing more than a month of education. Small pollution particles are known to be especially damaging. That is the same wherever you live. As human beings we have more in common than is different.
Mr. Aarash Saleh, a registrar in respiratory medicine in the UK and part of the Doctors Against Diesel campaign said: “This study adds to the concerning bank of evidence showing that exposure to air pollution can worsen our cognitive function. Road traffic is the biggest contributor to air pollution in residential areas and the Government needs to act urgently to remove heavily-polluting vehicles from our roads”.